LGBT History Month: Inclusivity, coming out and support in the workplace by Leng Montgomery 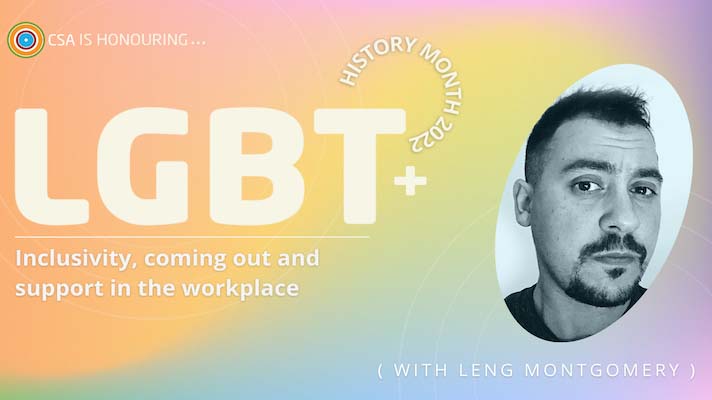 LGBT History Month is recognised in the UK every February. In the UK, it began in 2005 but it was first celebrated in the United States in October 1994.

This month shines a light on people and events that have often been underrepresented, under-documented or rarely mentioned. It’s also an opportunity to raise awareness around LGBT+ representation and the rights that have been afforded to LGBT+ people whilst acknowledging the remaining work that’s still left to do.

For workplaces it has been used to amplify the voices and representation of LGBT+ colleagues, customers, clients and service users.

‘Politics in Art: the arc is long’

This year the theme is ‘Politics in Art: the arc is long’ which has a deep-rooted tradition in providing representation and statements through various mediums. Consider artists such as Keith Haring whose graphics raised awareness of the AIDS crisis of the 1980s, or other artists such as Doris Brabham Hatt and Fiore de Henriquez who both challenged and fought against fascism in the 1930s.

Art will always be political and will provide a medium for us to confront and look at those who are ‘othered’ in society from a variety of different standpoints. Art can be used to provide visual awareness and a focus that makes us confront and learn more about other people’s lives and experiences.

In the present-day UK there are certain laws in place that protect LGBT people at work, but many of these are quite recent or been actioned in the last 20 years.

The Equality Act of 2010 does cover sexual orientation and gender reassignment but the latter is only applied if someone is in the process of transitioning or who has transitioned at any stage in their lifetime – still there is no legal recognition for non-binary or gender variant individuals.

Global equality has still got a long way to go

There’s more to being LGBT than having pride or having some laws or recognition when globally there’s still not full equality and it’s criminalised or still punishable by death in some countries.

In a study released in 2020 by FRA it showed that in Europe (including UK) that 11% experienced discrimination in job searches. In the US,; 90% of respondents to a survey by Transequality reported that they either experienced workplace discrimination or felt they needed to hide their identity to avoid it.

Workplace policies, strategies and the concept of coming out

When someone discloses that they have an LGBT identity it’s a big risk for them professionally and is something that requires compassion and support – especially if companies embrace language such as people ‘bringing their whole selves to work’. There shouldn’t be a pause or a reservation around hiring LGBT people or including them in senior roles or succession plans.

If strategies are to embrace and build in equity then LGBT needs to be a part of that plan. It is part of someone’s identity and not just a ‘lifestyle choice’. On a human rights level, it forms part of the UN’s charter for human rights as there still isn’t the full equality, safety and equity that is recognised in law.

In 2022 it’s disappointing that there are still societal debates about who people love and who they are.

There is a real issue when people feel they can’t talk about who they are in a relationship with, or face extra barriers or threats of violence or denial of goods and services just because they are in a same sex relationship or their gender identity is different to what was assigned at birth.

If someone comes out at work they are bringing you in, they are doing so to be authentic and honest.

In my experience, many policies in organisations fail to recognise same-sex parents in terms of policies, and quite often it’s ‘forgotten’ that someone who’s LGBT might be married or having a child/family. Not everyone wants to come out at work either for fear of it impacting development and progression opportunities.

The biggest issue people face that are LGBT isn’t being LGBT itself but is down to other people’s lack of understanding and compassion. Despite people’s objections LGBT people exist and will continue to exist.

However, some organisations have really shown some great examples of allyship and have cultures that actively embraces everyone and wants their colleagues to succeed. It’s also been demonstrated that organisations that have been inclusive around LGBT representation have had better financial performance and talent attraction and retention according to various reports from Open for Business.

LGBT History: Learning from the past to improve the future

What stays at the front of my mind when it’s LGBT history month is making sure that we are part of a history that rights the wrongs and forms a narrative that we can all be proud of.

LGBT people will always exist and aren’t just there for Pride. There have been struggles but there’s also so much to celebrate too.

Our history needs to be more inclusive so that everyone can learn about their role models and representation past, present and future.

If you’d like to learn more about how your organisation can create powerful, diverse and inclusive workplaces, we’d be delighted to discuss how we can support you.